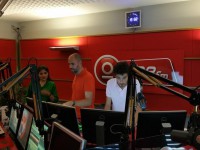 Geneva, July, 6th 2015: Alexandre De Raemy, CEO of Media One Group, welcomes Premila Manvi, Legal Officer at the Asia Pacific Broadcasting Union, in the station’s studio. Media One Group, a privately owned Geneva and Lausanne based radio station with public mandate, broadcasts two musical radio programs in French speaking Switzerland. With over 200’000 daily listeners, the group is in the top three favourite radio stations of the area. To strengthen its position on the market, the group has started the certification of its activities against ISAS BCP9001 in April 2015 with the support of Challenge Optimum SA and wishes to be certified by March 2016. Premila was at the studio to understand the significance ISAS certification was bringing to the Media One Group. The added value of the certification consists in standardizing the workflows across the two stations and the sales unit, attract more effectively new customers and ensure the programs continuously match the audience and advertisers’ expectations.